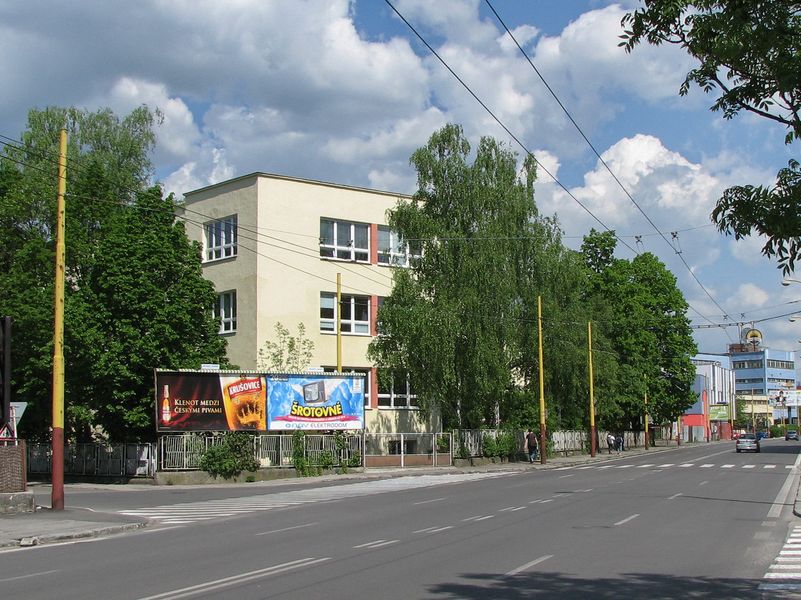 In 1932 to 1933 a public folk school with ten classrooms was built at the undeveloped end of Moyzesova Street. It was designed by Maximilian Michael Scheer. Bratia Ing. Novák company from Žilina constructed the three-storey building with upper basement. A new street called Školská was also created. Since then the building has been in continuous use as a school, only the name of the school and those running it have changed.
The school was officially opened on 28 May 1933 and the President of the Republic approved the name of the school, "T. G. Masaryk State Folk School ", in October of the same year. After 1945, further phases of school construction were implemented. A third floor was added to the original two-storey building and a gym linked to the main building was built in the courtyard. Classrooms were also built above the gym. The fourth floor was the last to be built in 1968-1970. It was designed by Červený an architect from Stavoprojekt Žilina. There was a kitchen on the ground floor and also a dining room and two after-school rooms. These were also found on the first floor. The number of forms increased by six thanks to the construction of the second and third floors.
In 1960 the school was renamed the Ján Nálepka elementary school after Ján Nálepka - a teacher, and later a Slovak officer, then partisan and finally a commander of the 1st Czecho-Slovak partisan section in the USSR. In 1963 the "School Museum of Friendship with the USSR and in the tradition of Nálepka" was opened. It was closed down after 1989 and in March 1992 renamed Elementary School Na Závaží.
Sts. Cyril and Methodius Elementary School established by the Nitra Bishop’s Office moved into the building on Na Závaží 2 in August 2004. The Queen of Peace Grammar School began operating in this building on 1 September 2004 with the opening of two first grade forms on 1 January 2005, when the Bishop's Office in Nitra merged it with Sts. Cyril and Methodius Elementary school in the newly established Queen of Peace Joint School.