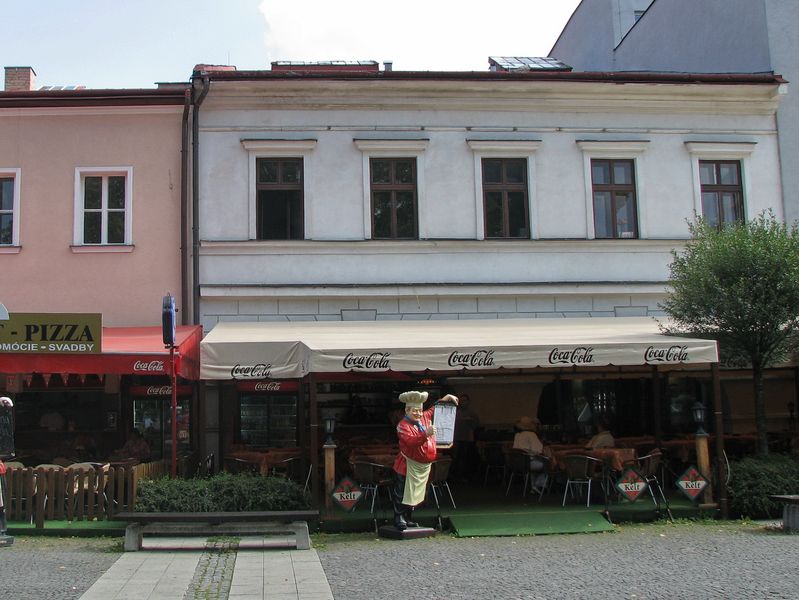 In the eighteenth century, the house was owned by the important Košela squire family which gave Žilina several mayors from the sixteenth century onwards. It was one of the richest families in the town, and was even given aristocratic status in 1610 by King Matej II. The mayors were Gašpar, Baltazár and Ján. In 1745 the owner is given as Ján Košela, in 1752 it was Adam Košela followed by his daughter Eva under her married name of Dlabačová. At the end of the eighteenth century there was an inn here. The Košela family owned the house until 1815 when it passed to the squire Ondrej Nedecký and his wife Mária Košelová. In 1825 the house was bought at auction for 3 500 florins by Adam Nedecký and from 1827 it was owned by his brother Pavol. His descendants still owned the house in 1850. At the end of the nineteenth century, the house belonged to Móric Ring, but from 1910 its owner was the lawyer Teodor Ring. This house was their first residence in Žilina. Members of the Ring family were among the richest burghers. The lawyer Teodor Ring was one of the most outstanding. In 1917 house no. 28 was bought by Jozef Tatár for 120,000 crowns. From 1926, however, the house belonged to Kolomon Klein who bought it for 350,000 crowns. In 1960 the building was nationalised. A clothes shop was founded here and until 1990 Modex Žilina had a shop and workshop here, with the Datasystém reprographic centre on the first floor.

The terraced townhouse is located on the southern side of the square. It has an original Gothic stone cellar with a seventeenth century Renaissance building above, rebuilt in the nineteenth century. The basement is made of quarry stone with barrel vaults but without any evident period details, thus making it difficult to date. It takes up the whole width of the plot of land and thus we can suppose that the Gothic house which originally stood here took up the whole street frontage too. The Renaissance reconstruction also includes a stone portal originally leading from the passageway to the right-hand wing which has a typical late Renaissance shape with a staffed profile and a bell-shaped cornice above the threshold. Together with the vaults and the three-winged Renaissance layout, the portal is an example of the application of period designs from which town buildings did not much deviate. In terms of masonry and the division of space, the basement does not match the upper part of the building, because it must belong to an older phase of development of the building.

The façade of the two-storey building, one of the largest on the square, is composed of five parts, with arcades on the ground floor. It is a hall-type house with Renaissance vaults. In the centre there is a double-run staircase with skylight. The ground floor has three wings and slightly different widths. The front part has retained its original Renaissance layout with cross vaults linked by an arcade with two bays of cross vaults which are set on prism-shaped pillars with a ledge. The first floor also has three wings, but their widths differ compared to the ground floor. The centre space is the stair hall in the central wing, into which the staircase opens up, borne by a pair of Tuscan columns. The prevalent style is Renaissance, followed by Classicist. In 1963 the building was included in the Central List of Heritage Monuments as KP no. 1412/0. It has original roofing with a low incline facing the square which was built after the last great fire in Žilina in 1886. Over the last few years, only the basement of the house has been renovated, and an extension added at the back, on the side of Makovický street. For the moment, the building is used as a shop; there is a restaurant in the cellar and a studio on the first floor.